Canada Day began with a pancake breakfast at a local church where we met with a few of the local residents who remembered us from our years in Dease Lake. The town turned out for the little parade with floats sponsored by local businesses and service clubs.  Although northern residents maintain a certain independence which is necessary to survive in remote areas, there is also a camaraderie and community pride that still exists. Difficult to express, it must be experienced to be understood. During my time spent in the north I had the opportunity to make music with a variety of local players. Dances were held every month or so and were well attended by young and old. Cabin fever dances, held in January and February were particularly interesting. The community hall was a vertical log structure and served well for many various functions. In winter months, when the temperatures would drop below minus 20, every time the door opened a large cloud of frozen vapour would pour into the room, usually accompanied by a few opportunistic dogs. Early in the evening folks would sit at tables along each wall, white folks on one side and native folks on the other. Although there was rarely any real animosity, there was a natural separation that only lasted until the band got going and the dance floor filled up. By the end of the night, there had naturally been a few disagreements, often settled with a short battle involving most of the guys and everyone usually went home with a good time had by all. Sometimes the next morning, the clean-up crew would have to kick out a few unlucky souls who had spent the night curled up on a bench or under one of the tables. 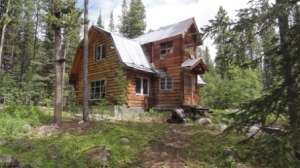 We toured a few old haunts along the way north to Boya Lake Provincial Park.  The old Kenny residence, built in the mid ’70s by our good friends Steve and Pene, seemed quite forlorn compared to the years when they lived there and hosted so many great times. It was unoccupied and quite run down. The sauna which used to sit squarely over the little creek had recently burned down. We reminisced about the peaceful Sunday afternoons when we would fire up the sauna, get all poached inside then plunge into the icy water just outside the door, only to return quickly to the blasting heat of the big wood fired stove and throw another dipper of water on it, creating a cloud of steam and vapour. 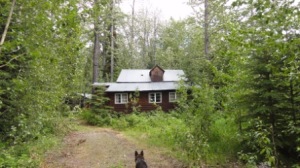 Our old Centerville honeymoon villa, also quite sadly left to rot into the ground was quite hidden amongst the huge cottonwoods and we had a bit of trouble locating it. It appeared as though no one had lived there for the past 25 years or so. Maggie and I bought this little cabin from a local gold miner for a few ounces of gold nuggets and a promise to pay off the remainder of the $15,000 price tag. Our nearest neighbors lived about 2 kilometers upstream. It was very peaceful and quiet. We lived there for about a year and a half.  Erik spent his first winter snuggled in blankets with the wood stove blazing here on the banks of McDame Creek. We have many good memories of those years, as do most couples of their first few years together when they didn’t have two nickles to rub together and their love made up for the missing comforts.

We spent the day at Boya Lake Park and did a bit of canoeing on, hiking around and fishing in the lakes, which are a variety of blues, greens, turquoise and aqua marine, depending on how the sun is shining. Speaking of which, the sun rises at about 04:00 and sets at about 22:30. I sat out by the fire until well after sunset. The curious lack of mosquitoes, the absence of all man-made sounds, the distant cry of Pacific Loons, squirrels, woodpeckers and other songbirds along with the odd splooshing of trout rising to the surface for flies made for what might be called a rare and serendipitous event in my life. A very memorable moment.  I suppose that if I was on a quest to relive some of that which I had experienced in my younger days in the Cassiar mountains those brief moments of utter natural tranquility served to satisfy my quest and soothed my soul. 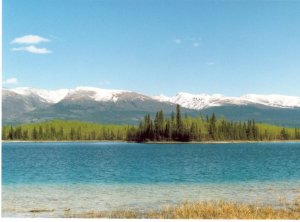 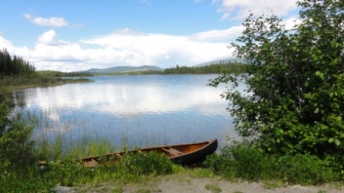 I awoke at 05:30, made a cup of coffee and took it out to a narrow point which jutted into Boya Lake. The rising sun dissipated the early morning wisps of fog that had been drifting about. There wasn’t a whisper of a breeze. Across the lake a cow moose and her calf made their way along the shoreline, squirrels chattered and the mournful cry of a loon echoed around the lake. 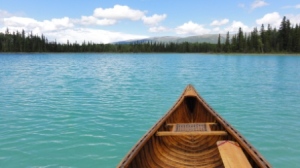 We packed up camp and continued north to the Yukon border passing through a number of recently burned off areas. There were many mushroom pickers and buyers set up in the burned areas. Pine mushrooms and morels fetch a good price on the international market and some pickers can make $2-300/ day. I had worked on the road crew through this section of highway in the early ’80s, however, there has been much upgrading and the road is now widened  and paved. Once we reached the Alaska Highway we detoured the 15 miles into Watson Lake. The local claim to fame here is the prominent display of signs from all over the world. A carry over from the 1940s when homesick highway construction workers placed a few signs on a post to remind them of home, there are now an estimated 10,000 signs displayed from all over the globe. 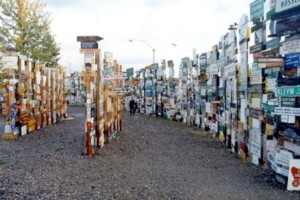 Although the town is larger and has more amenities now than 30 years ago we found ourselves quite disillusioned with its appearance. Dust, mud and whiskey still seem to be the way of life in Watson Lake. We have also noticed that the frontier feel of these northern communities, which was so very present when we left the area in the late ’80s seems to have been replaced by asphalt coated highways and goods made in China – just like every other town in North America. Fuel price was $1.35/ litre, only $.03 more than in Nelson when we left – very curious! When I first came to the Yukon in 1973 the price of gasoline ranged from $.45/gallon in Ontario to $.35 in Alberta and an unbelievable $.80/ gallon in Watson Lake. So, almost double in the ’70s to only a few pennies difference now. I really do believe we are being toyed with.

We carried on northwest on the “Alcan”  highway past the village of Teslin and found an adequate dry camping spot near an abandoned airstrip. I remembered this hidden spot from having stopped here in the mid ’70s. During the construction of the highway there were crude airstrips constructed every 50 miles or so to supply the camps. Each airstrip is roughly 2000 meters in length. Some, like this one, remained useful to guides, hunters and trappers as well as other interests such as mining and forestry. This one appears to have been used until a few years ago but now there are small trees beginning the process of natural recovery down the centre of the runway.

We arrived in Atlin at about 13:00. The Atlin Highway runs south from the Alaska Highway. It is 100 kms long, about 75 are now paved or sealed and construction on the remainder is ongoing. It begins at a junction known as Jake’s Corner.

I first met Jake in 1974. His real name has always been a mystery to most people. Some knew him as Roy Kokowski, others called him Jake Chaykowski. He was, perhaps, in his mid fifties at that time. He had longish greying hair with an ever present toque and a full beard. Jake and his wife had immigrated from the Ukraine long before it was legal to do that. He settled in the Yukon after having staked a gold claim and mined some of the gold. His dream was to one day own and operate a Nevada style resort and to that end he established “Jake’s Crystal Palace” on a property about 80 km’s east of Whitehorse. The property was one of the original army camps set up during the construction of the highway and had been commanded by a Colonel Jacobsen. The good Colonel had made a name for himself by undertaking the construction of the Marsh Lake section of highway without the approval of the Army Corps of Engineers. The section bypassed the arduous route through Carmacks and was eventually sanctioned as a quicker way to Whitehorse. Hence the name, Jake’s Corner. After Ukrainian Jake acquired the property he built his palace in the 1960s.

When you entered the main doors there was a large square swimming pool on the main floor surrounded by some crudely built patio furniture and hotel rooms on either side. A mezzanine overlooked the pool with a dance floor and band stage suspended above the water. A large well stocked bar filled one end of the area and there were comfortable tables and chairs arranged around the perimeter.

At some point in the history of the palace a travelling band had been stuck for money to repair their broken down bus and had sold an immaculate Hammond B3 organ which was prominently positioned on the stage. Of course this incredible instrument captivated my imagination and so I stopped there at every opportunity to tickle its ivories.

It was always interesting to sit and listen to Jake. He had a vivid imagination and was full of ideas about how to help people enjoy themselves. He really enjoyed having large groups book his palace for weddings, birthdays, stags or what have you and he would describe some of the antics that he had entertained. The era was one of free will and the location, somewhat hidden away in the Yukon, provided those folks who had disposable income the opportunity to just let loose and have a roaring good time. He joked about one group who played musical rooms well after the midnight sun had re-risen into the early morning sky.  He said people would stumble out of one room, fall into the pool then just stumble into another room, displacing one of the occupants of that room. And the scene would be repeated throughout the weekend.

One of Jake’s favourite topics and one about which he was eager to discuss with young musician type people like my friends and me was the idea of producing a large, outdoor music festival. Somewhere nearby (he wouldn’t disclose the location) he had found a large natural amphitheatre that he thought would be perfect for a festival. We never heard whether or not he was able to fulfil that dream.

By the mid-’70s the weekend party business was winding down and Jake’s business began to deteriorate, as did the Crystal Palace. As the income from his party palace waned, Jake looked to other investments to keep the cash flowing. There was some rumour of a new woman in Jake’s life along with some hushed up tales of smuggling and the police.

I stopped in to Jake’s Corner this morning to top up my fuel tank. Apparently Jake passed in 1999. The business sold shortly thereafter and is now owned and operated by others. I was surprised to see the “Palace” still standing. So many older wooden structures seem to succumb to some form of financial combustion. It still looked viable, however the outbuildings seemed to be in a state of disrepair and dysfunction. 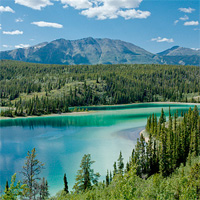