A Winter In Europe

In the spring of 2013 Maggie and I, on a wing and a dare, embarked on a three month tour of western Europe with a couple of packs and an unlimited train pass. We flew into Barcelona and a few days later we were on the train, cruising along the Mediterranean coast. We had booked the first week or so and after seven days found ourselves in Nice, strolling along the Promenade des Anglais, ready to get going with no particular destination or plan. We chose to continue along the coast into Italy on the “slow train,” passing by the glossy streets of Monte Carlo and Menton, the essence of the Cote d’Azure and on into Italy. As the day unfolded so did marvelous scenes of beaches, populated cities, beautifully manicured Italian gardens and the ubiquitous vineyards and olive orchards. Later in the afternoon the train became quite lively with senior high school students, most dressed in school uniforms, as they traveled home, disembarking at various small villages along the coast. At about 5 pm we were nearing our limit of train travel for the day as we rolled out of a tunnel and stopped at the small station of Moneglia, just west of the National Park, Cinque Terre. We gazed down towards the water through palm trees gently swaying in the breeze at what appeared to be a sleepy little village where most of the folks getting on and off the train were carrying walking poles. We instantly decided to disembark and look for a suitable hotel. I think we both said at the same time, “This will do!”  It didn’t take long for us to find the perfect little albergo, owned by a semi-retired gentleman whose career had been with the Hilton Hotel chain throughout Europe. He had purchased the hotel a few years earlier and was operating it as a family operation. Mealtimes were a bit humorous with Alberto’s son and daughter waiting on tables with the white towel draped over their arms, etc.  Alberto greeted us and asked how far we had traveled. Hearing our somewhat tired response he immediately escorted us to a table on the patio and supplied a cold beer and a chilled white wine. We settled right in.

We stayed for about 10 days, using the ease of the train tickets to visit the other nearby towns, hiking up and over the hill trails between towns, enjoying the Mediterranean cuisine, the friendly residents and the welcome, warming spring sunshine.

Oh, did I mention hiking up? And up, and up, stairs, rocky trails ancient Roman Legion roads – if there was a trail going up, my dear sweet, athletic partner itched to conquer it. There were days that I was sure her purpose was simply to leave me in a heap of quivering blubber at the edge of a cliff and watch me ooze over. 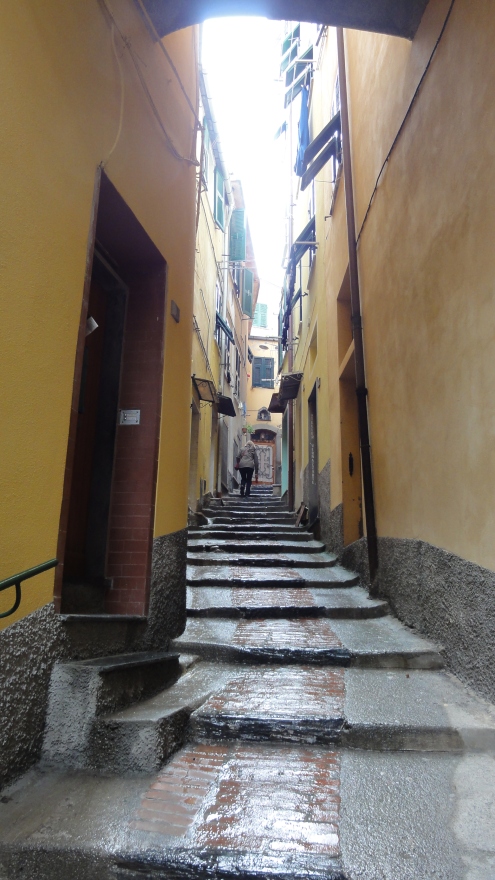 Above – The seaside village of Manarola

Below – Hole in the wall market and really fresh fish 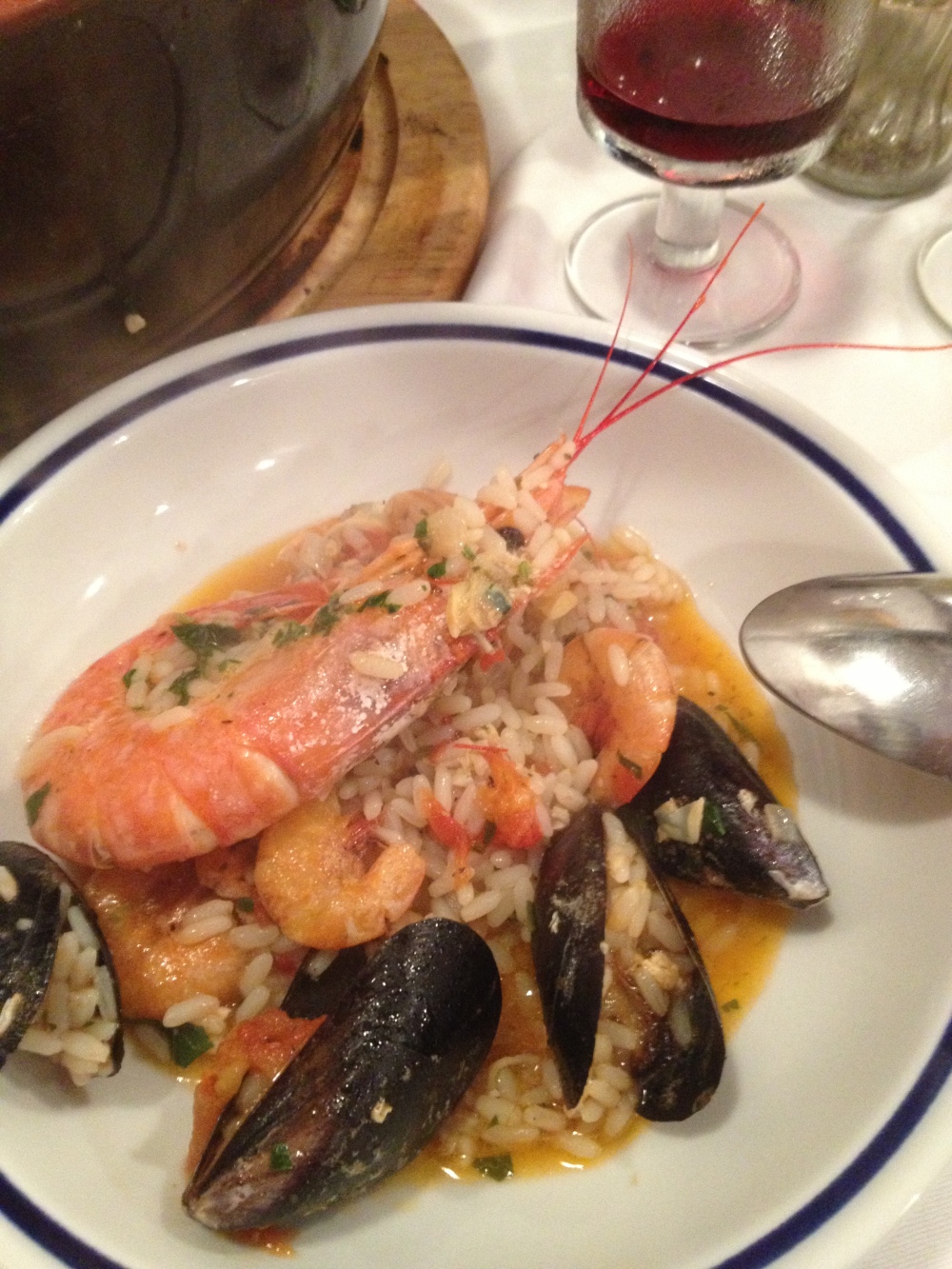 Did I mention wine…… ..  and dining?…… One of the customs we enjoyed was at the end of the meal a bottle of Limoncello and 2 small glasses are produced, au gratis. When we quizzed our hotelier host about Limoncello he got a distant look in his eye and said, “Ah, Limoncello, itsa maka me feel so happy!”

Our hosts Alberto and Christina Crava at their Hotel Italia in Moneglia, May 2013.

Once we were able to pull ourselves away from Italy we headed into the Alps by way of Austria, through some very rainy, flooding weather near Munich and on into Switzerland. We took a spur line up a mountain to the resort village of Arosa and stayed a couple of days in nearby Litziruti. At breakfast one morning our hostess mentioned that the cheese we were eating came directly from the cows that were, at that moment, being herded past the window.

And it was there, in a train station somewhere in the Alps that we decided that we had to see the Alps in winter – ride the trains, experience the ski season (although both of us are well past being able to negotiate downhill slopes with slippery boards strapped on) and see Mont Blanc and the Matterhorn in their full winter regalia. 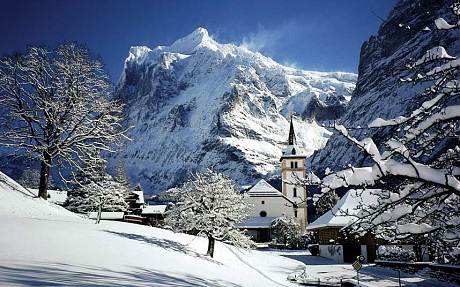 We would have returned to Europe much sooner than 2018 but sometimes life gets in the way. Children come and go, houses get sold, health dwindles then returns (albeit slowly) but the dream remains and one day it’s time to just go!

We had a call from a good friend who lives in Hawaii. She needed someone to house sit while she took care of some family business on the mainland. Were we available? Hmm, 3 weeks in Hawaii in the sun or the Koots in rainy September. It would be a great opportunity to do the research, ponder destinations, arrange tickets etc, all the while chillaxin’ with a cold beer or 3 on the beach  – duh, ya!

We decided to add a month on the beginning end to visit with family and friends in Ontario and then we thought, why don’t we just drive across so we’d have our own car to tour around with in Ontario.

We mapped out a rough itinerary which begins with a week in Paris (there’s never enough time or money for Paris) then a couple of nights in Strasbourg just to get into the Christmas spirit before visiting with friends near Heidelberg for Christmas and New Years.

After that we’re off to Lisbon by air for a few nights, rent a car and tour the Algarve for a week or three. Then it’s on to Valencia in the south of Spain for some of those wonderful oranges.

Sometime after that we’ll activate our train passes which are good for three weeks of unlimited travel. We’ll head through France and into the Alps at Chamonix, at the base of Mont Blanc, then cross into Switzerland, putter around on the narrow gauge rails for 10 days or so, wrapping up in Vienna before dropping down to Venice and farther south down the Adriatic coast to Bari. There we’ll board a ferry and cross over to Albania for a month or so and end our excursion somewhere in Greece before flying back to Toronto in early April.

As always, if things can go sideways they may, and any plan must be fairly flexible. After a few weeks of plowing through snow we might just feel like heading somewhere warmer for a week or two before resuming our plan. Life’s like that these days.

One thought on “Eating Dessert First”